Here at Baby Blue Bee Bunnies we offer a sanctuary place here with us for bunnies who enter our rescue who have special needs or are elderly to live out their happy retirement with lots of love and other bunny friends. These are rabbits who cannot otherwise find a home.

Our group of resident buns are all rabbits who have found their way to the rescue and can't be adopted, have special needs or are elderly and retired. Most of them have health issues meaning they need on going treatment. Our group live at the rescue in the Directors home where they live free roam indoor and they also have an extensive runaround play system outdoors for good weather days.

​We also offer select sanctuary spaces for special needs giant buns from other rescue centres across the UK who cannot be rehomed or need specialist care. This is because we know how complex giant buns are and how difficult it is to find them homes if they have special needs also with how much space they need. Often giants have many health issues including joint and back end mobility issues and eye/ear issues. We have a lot of experience with special needs giants and our sanctuary buns have complete free roam space and 24/7 care as well as top exotic vet care and treatment.

To sponsor one of these buns means the chance at helping with their care and being able to visit them. It makes a percect gift for those unable to have their own rabbits and would like to support a bunny in need.

Sponsorship can be paid either monthly or one annual installment.

Suggested Sponsor costs are a minimum of £5 per month/£60 per year
To sponsor a bunny email bbbbfundraising@gmail.com

Valentino was found as a stray, dumped and in a horrific state so we don't know his age or background. Goodness knows what he witnessed, but it has affected him as he really hates going outside! He was taken in by another rescue and rehabilitated then we offered him a sanctuary home with us. He is a strong big giant with bolshy behaviour and loves being group Alpha. Sadly he suffers with lumps that appear on his body and has issues with his ears so needs ongoing care and medical treatment. He is quite the character who charms all who he meets, you can hear him thundering down the hallway with his humungous feet. He loves to charge around and doesn't let his size stop him jumping up onto the dining table to try and steal food. We call him the blood hound as he can sniff out food a mile away, we are sure he uses his big lugs to waft the scent of food near to his big button nose.

Tiffany was hand reared by us here at 2 weeks old she was going to be "culled" as her mother ate the rest of her siblings. We took her in and raised her but sadly she has always had health issues and suffers from kidney problems, incontinence and arthritis as well as liver failure, a heart defect and a collapsed lung which causes her breathing issues. She is also deaf and relies heavily on the others in the group for comofrt and security to help her get by. She is also on long term medication, gets physiotherapy and joint care.
​She is a tiny tot with a massive personality. She is loved and accepted by every bunny she ever meets as she is extremely submissive and of no threat, she loves to be groomed by other bunnies and cared for but she doesn't do much of the grooming to them. She does however, groom humans lots! She will give you kisses top to toe and if you offer her your hand you will get licked all over. She was hand reared so her sanctuary mamma has a special bond with her. Tiffany is not rabbit like at all, she is much more like a little person. She doesn't do anything rabbity and fails to understand that she should be a prey species. She is a real rare little gem who loves to be picked up and carried about, she sometimes spends all day carted about snuggled in a dressing gown. She can't hop up onto things so will meerkat for you to pick her up and sit her on top of where she wants to go. She then meerkats again when she wants back down. She loves to sleep on your shoulder and neck and will curl up there into a tiny loaf and sway from side to side purring her little teeth. She is scared of nothing and prances about the house like she has no cares. She has never nibbled at anything, she even licks wires instead of nibbling. Don't let her cuteness fool you, she has sass! She likes to flick her feet when she is annoyed and her third eyelid comes out when you steal her fibre stick off her! When it comes to food she is a complete diva and gets away with murder by the other bunnies, she will steal everyone's food and while she acts and seems like a dithering bimbo most of the time can work her way into any puzzle before any other rabbit if food is involved. One time we bought a food feeder that in the comments said "even my great Dane couldn't get into this, it is completely dog proof".... Tiffany got into it in 3 minutes. Says it all really. There is no one like our little Tiffany, of all the bunnies we have ever met (thousands and thousands!), she is completely and utterly special and life won't be the same without her in it.

Harrod is our little shy bun who we rescued in 2015 from living under a garage where he was traumatised. He screamed for many months when he was touched and it took us a long time to gain his trust. Hedoesn't like changes to his routine or meeting new people. He is very cautious about things and who he trusts. He does have a cheeky side to him and wiggles his bum at you once he snatches the treat. He absolutely loves a head rub if you lie quietly with him and he will purr away. He has the softest fur of the whole group but he often has a permanent tutu tufty bum which he does not enjoy getting plucked! For the first 4 years of his life he had helicopter ears and one stood right up, it never once went down. He was devoted to his bunwife, our dear Macy and would bow at her feet night and day never leaving her side. On the day she died, his up ear flopped down and he whimpered for 2 weeks, not moving from one spot. His ear has never went back up and we know he still misses her. Never have we seen such a broken heart in a bun, even though they have always been in a big group and had lots of other company he has never been the same since he lost his one true love, his Alpha and Queen. Interesting fact about Harrod, he is neither a boy nor a girl. We refer to him as "he/him" but he was born with hermaphroditism due to inbreeding so he doesn't have either sexual organs. 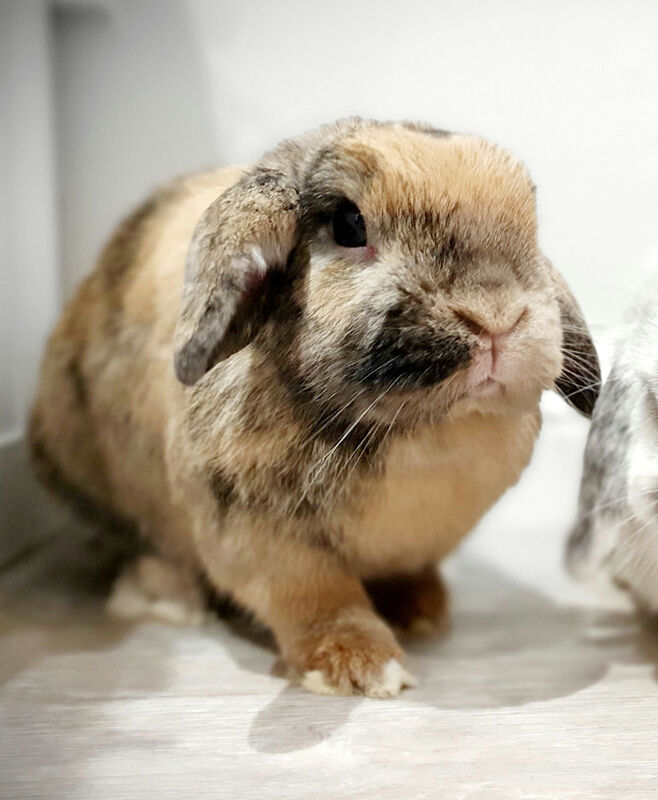 This little boy has so much attitude! He is our smartest sanctuary bunny and knows dozens of tricks, he absolutely loves clicker training and comes running when you shout his name. He loves to dig blankets and throw things, he is such a diva we are often unsure if he is truly a boy. He always had a gentle nature until his bunny mamma Macy passed away and then he stepped up and became the stroppy pants that his mamma was. He is always binkying around the house and is often found in the morning sat up on the couch. He likes to hop up onto your knee and back and is extremely nosy, he will always be the first one to check out new things and isn't shy! He knows what he wants and likes and he will put his little paws up on you and you'll be sure to give in to his demands. He enjoys looking after his bun family by nipping their backsides and telling them off. A lot. This little diva has our heart as he was born with us in 2016 after we took his mamma in and she gave birth to him and his two brothers. Sadly he is the last of them now with us as his two brothers and mamma have passed away. He has typical mini lop problems and has to have regular ear flushes to prevent wax build up. 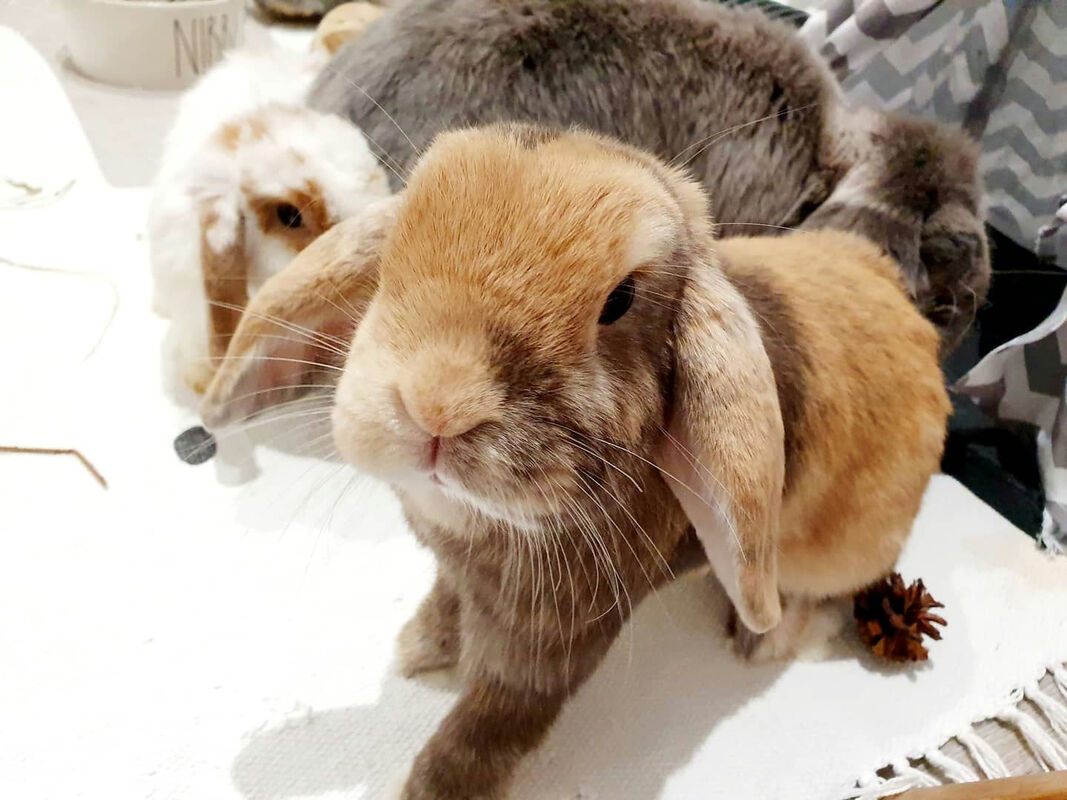